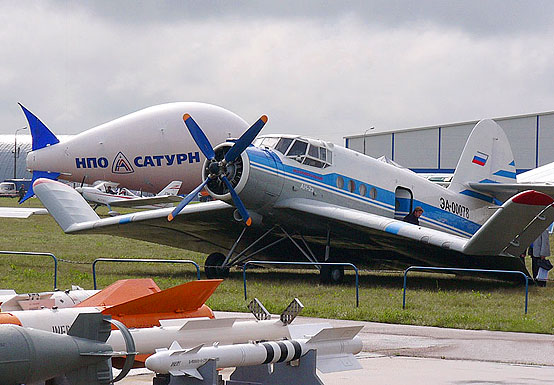 Idea to convert the An-2 into wing in ground effect (WIG – Ekranoplan) aircraft was first postulated in the 1970s. It was in 2003 the idea was finally concretized by the Moscow Aviation Institute (MAI) and built by the Moscow Aircraft Repair Plant (MARZ). The prototype employed a plain Polish-built An-2R whose biplane wings were replaced by a large trapezoidal monoplane wing equipped with 45º diedral wingtips. It was intended to be a floatpane eventually, but teh An-2E retained teh AN-2’s classic fixed undercarriage. Its standard ASh-62IR radial engine was also a stopgap pending the diesel power plant envisaged.
The An-2E was presented at the Zhukovsky MAKS-2003 airshow (photo) where it was announced its test programme was about to being. That never happened, in fact there are no evidence of even being flown. The sad wingless fuselage was last seen at the MARZ Chernoye airfield. A pity, it had such a homely bizarre shape.