The lovely Pchelka (Little Bee) was conceived in the mid-1950s to replace the An-2. First flown in 1958, this neat design emerged as a easy to fly and handy little aircraft, but despite those qualities it failed as a replacement for the rugged biplane. The numbers said it all, just a few more than 300 were produced against the around 18,000 An-2s. The potential of the An-14 airframe was undeniable though and it later evolved into the turboprop An-28 and its PZL Mielev variants.

This monstrosity was Antonov OKB’s second attempt to equip their An-14 with an air cushion landing gear. The company played with it during the early 1980s and it flew quite nicely, but the air cushion shirt was never retracted before the project was cancelled in 1986. Note the TA-6A-1 APU exhaust on the middle of the fuselage; that gas turbine provided air for the cushion.

“Final Farewell.” The superb homage to XH558, the last airworthy Vulcan which ceased flying in October 2015. Gladly, the iconic XH558 is well-cared and continues to inspire nowadays thanks to the people of the Vulcan To The Sky Trust.

The very descriptive drawing taken from the book “Visions of Spaceflight” depicts Wernher von Braun‘s early 1950s concept for a space shuttle emergency escape system. This tight ejection type capsule maybe could have been quite claustrophobic but at least it was an option; the STS didn’t have any of those luxuries and their crews paid the price. 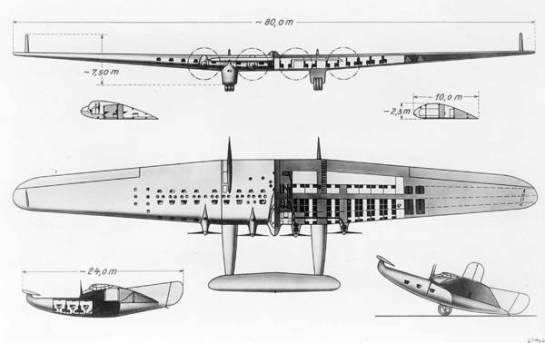 Hugo Junkers was one of the earliest proposer of the flying wing (nurflügler) configuration. Starting with Junker’s concept of thick wing profiles the idea soon evolved into that clean configuration, a 1910 patent (DRP 220 124) included.
This design study of the early 1920s was headed by Otto Mader was a gargantuan four-engined transatlantic 80/100 passengers airliner with a 250km/h cruising speed and a 10h of autonomy. Not a pure nurflügler to be precise, with its canard elevator and vertical fin and rudders. Junkers himself made a promotional trip to the United States in 1924 with company engineers, plans and models to sell the idea. Sadly it proved to be too daring even for the usually bombastic Americans; there were no takers.

Monumental, to say the very least.

Just like many Western Air Forces, The spanish Ejército del Aire put their trust for jet aircraft pilot training into the superb Shooting Star. This glorious-looking example was one of the more than 60 in service in Spain. It was part of the 101 Escuadrón (Manises), an iconic fighter unit equipped with the Sabre.

It carried its name, but Boris P. Lisunov was just the stepfather of this aircraft. In fact, the Li-2 was nothing more than a russian licensed version of the Douglas DC-3. Lisunov was in charge of the commission entrusted with the adaptation of the DC-3’s plans to russian standards.

This example need all the rugeness of its sturdy design to endure the brutal winters outdoors conditions at the Belarus Museum Of the Great Patriotic War, Minsk. Magnificent photo, looks almost like a sort of logo.

Jacob Ellehammer sat proudly in his workshop. The little model at the right seems to be his 1908 IV biplane. Ellehammer built this biplane after his more famous triplane. Like the latter it also was conceived with the same pendulum control system. The IV made some short “hop flights” in Kiel, being in the process the first to achieve flight in Germany. Despite that milestone, the design proved to be not very practical and was abandoned.

The cute paddle-shaped propeller and the five cylinder air-cooled radial engine (maybe the actual IV under construction) behind Ellehammer were also fruits of his clever mind. His previous work in motorcycles sure came handy.