The Iskra (Spark) was designed to meet a Warsaw Pact specification for a basic and advanced jet-powered trainer. The prototype made its maiden flight in early 1960. The Czech L-29 Delfin won the evaluation, and it was accordingly the aircraft selected to be mass produced for the USSR and its related clients. Poland, with a national industry to support and not happy with the outcome, chose to go put the Iskra in production for their own needs. Performance was never the Iskra’s Achilles’ heel anyway: it achieved four world records in its class. More than four hundred were produced for the Polish and the Indians, the only foreign sale.

I kinda like this spartan “pod and boom” trainer. Nothing fancy, but pretty anyway. This gorgeous photo also helps.

One of those photos -poor quality, sorry- you never forget; at least it’s my case. An Indian An-12 is seen landing at the harsh Leh high-altitude airfield (Ladakh Himalayas), 11,5554 ft above sea level. While these soldiers bring in a casualty by a yak.

Getting closer to the 80th anniversary of the Battle of Britain. I think it’s time to pay some homage, starting with this winner’s failure. The Defiant was the highest exponent of the very British bomber-destroyer “turret fighter” concept of the 1930s. The mere idea of shooting at bombers like on naval warfare… Well, the Defiant proved initially moderately successful, until the initial surprise was overcome. All was not lost though. They proved to be more than decently efficient stopgap night fighters and, in the long term, able target tow workers.

It was a neat looking aircraft nevertheless. A cross between the shape of the Hurricane and the construction of the Spitfire.

A SR-71 from the 9th Strategic Reconnaissance Wing setting the sun while landing at its nest at Beale AFB, Calif. If things continue this way a specific Habu’s “Just Because” section will be in order.

With the building of the Northrop 8-A 1 under licence, the ASJA/Saab company found themselves with the knowledge to design and manufacture modern all-metal monoplanes. So in the Spring of 1940, Saab offered the Swedish authorities their all-new type 17 aircraft. This was, at first, intended to fulfil a recon aircraft role, but soon was redesigned as a dive bomber. First flown in 1940, the Northrop’s roots were quite evident in the successful prototype. Production soon started in three basic models powered by three different engines; Sweden was a neutral country and engines were hard to produce or find. A total of over 320 of these sturdy aircraft were build.

A pair of stupendous looking B 17B (980hp Bristol/Svensk Flygmotor Mercury XXIV) from Wing F 7 in this gorgeous photo. The backward folding undercarriage with its bulky covers looked dated. That odd design choice was employed to keep the wing free of any landing gear recesses, and stronger accordingly. Not a bad idea for a dive bomber.

Jack Northrop’s out of this miserable world YB-49 “Flying Wing” on its way to nuke some Martians on the classic “The War of Worlds” 1953 movie. Archive images: flight testing of the sole remaining YB-49 prototype had ended three years before.

Some fireworks. Happy 4th of July. 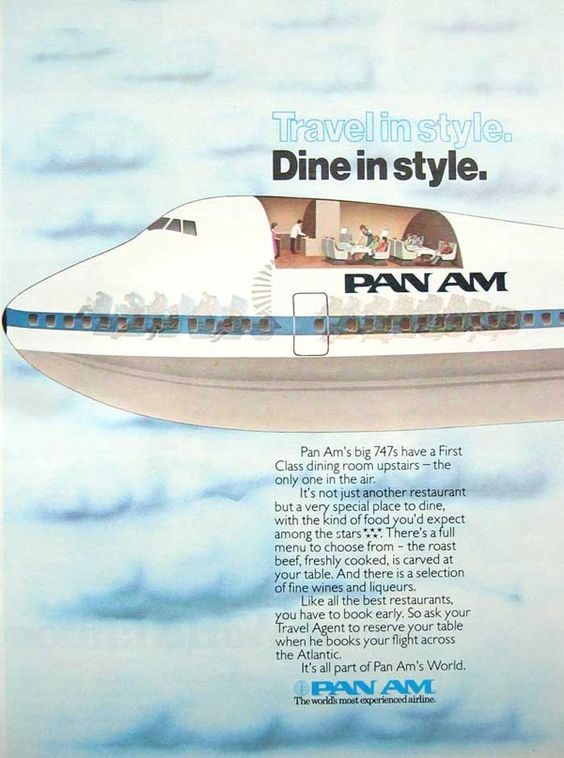 The news many of us aviation enthusiasts have dreaded. Boeing reportedly will stop making their 747s for good after they’ll complete the last of the 15 aircraft currently on order. After more than five decades in production, the final 747 is expected to roll off the line in the next two years. The end of the four-engined widebody airliner era is completed with the announced A380’s production termination; a sad and ugly sales failure.

Pan Am‘s last years of splendour and the still young Jumbo in this charming 1979 ad. How time flies.

The always natty Donald Douglas Snr enjoying his first DC-8 flight on the prototype. Arguably a better design than the 707, the DC-8 arrived second to the market, and sales sadly showed that.

The cruel irony: a photo taken from the Boeing Historical Archives. Colorised by Benoit Vienne.

Regrettably not every service was interested in the cartoonist Beverley, much less in the civilian Universal.

The Stout 2-AT Pullman was the first of the “Tin Gooses”. Developed by William B. Stout from his previous 1-AS Air Sedan, the Pullman like its forebear was conceived taking notes of the seminal Junkers F.13. In configuration, this high-wing all metal monoplane was a more conservative design and employed the plentiful 400hp Liberty engine. First flown in 1924, it took part successfully next year at the Ford National Reliability Air Tour. That led the same year to their introduction into service with the newly formed Ford Air Transport Service (one of them here). And later to Ford’s acquisition of the design rights and the creation of the iconic Trimotor.

Close to my hard working fan. Summer is here to stay.