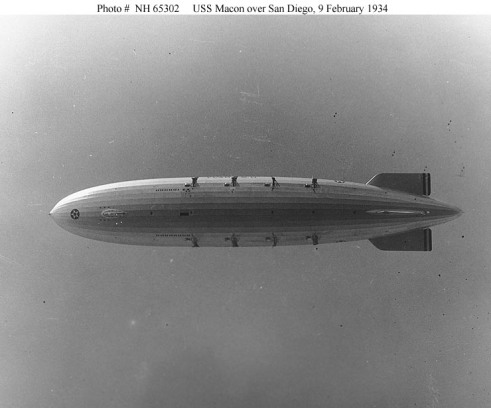 Unusual upward view. This photo depicted the idiosyncratic Akron/Macon features: its 8 buried engines that drove their props via drive shafts, its somewhat chubby profile and the questionable stubby fins.

These pair of prototypes were built to fulfil the RAF Specification F.7/30 of the early 30’s. This fighter specification demanded a top speed of at least 250 mph (400 km/h) and an armament of four machine guns, encouraging the use of the new RR Goshawk evaporatively cooled inline engine.
Both designs were bold in their own right and both used the risky Goshawk. In the foreground the Supermarine 224, the elegant “Art Deco-ish” RJ Mitchell’s monoplane. In the background the deceitfully classic Westland entry. Westland designer Arthur Davenport placed the Goshawk buried deep into the middle of its fuselage, the propeller was drove via a long shaft.
All effort for nothing, both had a showed unimpressive top speed and a nightmarish engine overheat problems. The RAF chose the ultra orthodox Gloster Gladiator.

Gorgeous photo of a long passed era. Taken, maybe, when both were “New Types” in the Hendon Air Show.

Another guy who underrates the genius of Jack Northrop explaining, for no good reason, that not only Northrop’s eponymous Flying wings (YB-35/YB-49) but even nowadays B-2 are in essence “Horten’s stuff”.
Northrop and the Horten Bros were almost contemporaries, the classic case of parallel development. Jack’s first timid steps into the flying wing universe were made in the late 1920s with the temptative X-216H. By the time the delicious “Jeep” experimental testbed flew (1940) Northrop felt sure enough: it was in fact his first truly flying wing aircraft. Anyway, there was still a lot of work to do and the N-1M was just the first real step into the development of Northrop’s quest.

Good to know this gem is so lovely preserved in the National Air and Space Museum’s Steven F. Udvar-Hazy Center.

Aviation with its giant advances in The Great War brought the birth of the real total war.Strategic bombing, even when the targets were military objectives, caused indiscriminate civilian victims due to technical inmadurity.

Created in the June of 1918, the British Independent Air Force (IAF) main objetive was to strike deep, into the German infraestructures. The superb O/400 bombers were IAF’s strongest exponent. 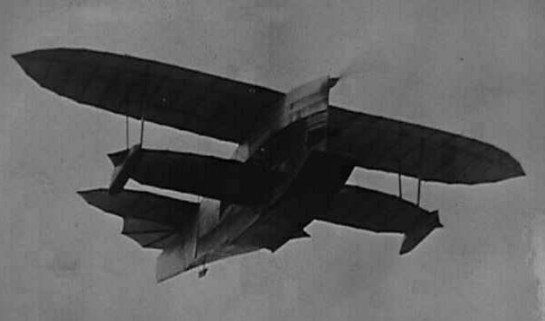 The brief (1913-19) but interesting Lawrence-Lewis Aeroplane Co built this stunningly beautiful contraction. The 1916 “A” model was an advanced enclosed cabin -one of the earliest- “wing-warped” sesqui-biplane seaplane. Powered by a 4-cyl Kirkham engine (the latter A-6 model used a Wisconsin 6-cyl) placed in their lower fuselage,the engine drove a upper prop by chain. The story of these lovely seaplanes is quite oscure. The number of aircrafts built or modificaticated and their different configurations are object of debate.

They were sure cooler than a cucumber.

Beware, the American Jurggenaut is comin’. 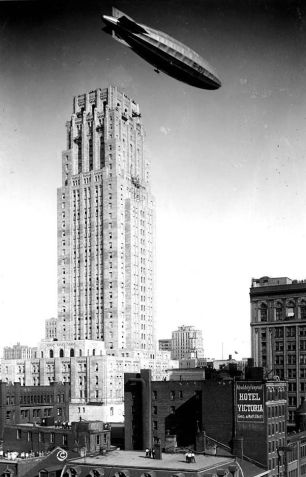 A simply magnificent photo taken in Toronto during the one and only overseas flight of the R100, the Transatlantic Flight to Canada of Aug. 1930. While in Canada,the “Capitalist Airship” made a day-long sight-sighting flight over various cities,Toronto included.
The “Manx Cat-Tailed” R100 is here flying over the Commerce Court North building, the tallest Skycraper in the British Empire at the time.

The Sopwith 1½ Strutter was one of those aircraft just right for their time. Of interest, it was the first British aircraft equipped with a synchronised machine gun. This highly versatile single/twin-seater earned that peculiar “1½” moniker due to its peculiar wing struts design. A no-nonsense built aircraft in the usual Sopwith tradition, the 1½ Strutter first saw service with the RNAS during early 1916, and some were still in service 2 years later -with the French- when its obsolescence was more than evident.

During WW1, the word “Archie” was used by the RFC to name the anti-aircraft fire. The most widdely accepted story about its origen came from a song “Archibald?,Certainly not!” first performed by George Robey in 1911. 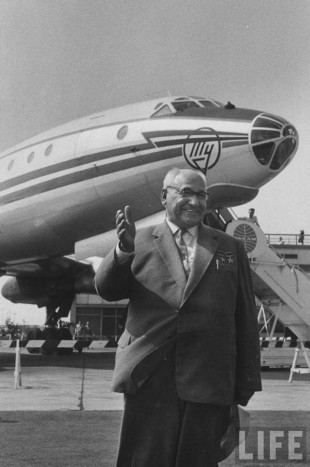 The ultra-proud Andrei with his Baby, CCCP- Л5611 –Tu-114 first prototype, Andrews AFB, Sep 15 1959. Photo taken during Khrushchev’s US visit.
Notorious in the forward door the more than necessary extension to the Pan Am stairs….. talking about serious upmanship. 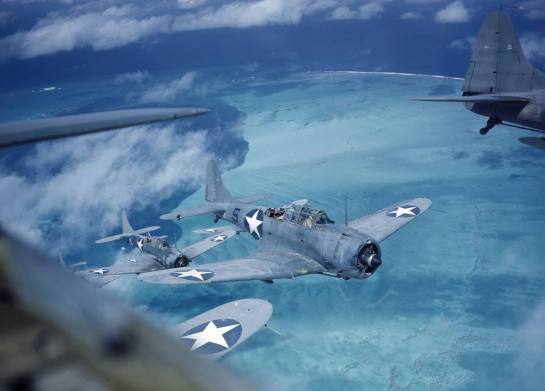 Splendid -and tight- group of war-weary Douglas “Slow But Deadly-3″ dive bombers. “Prouling” around the reefs off Midway Island,1942. The gunners look quite relaxed, with their Browning MG’s stored and enjoying the wind…. yet “5” seems to have a significant “dent” on its starboard stabilizer.